By admin | Beyond Santa Marta | No Comments

Casa Loma is a beautiful wooden hilltop house that offers one of the most amazing views from any hostel in Colombia, particularly at sunset!
Situated above the town, you’ll overlook Minca, Santa Marta, the sea, plus the mountains of the Sierra Nevada and forest all at the same time—truly unique!

Situated in the centre of Minca, Emerald Green offers a great mix of Irish and Colombian hospitality with tropical gardens and bright rooms with terraces overlooking the Minca River and surrounding mountains.

The park has an abundant variety of wildlife, many of them endangered. The existence of 33 species of mammals indicates a maintained high diversity, despite the environmental problems affecting the ecosystem. The park is home to 98 species of invertebrates, nine species of amphibians, 35 species of reptiles, more than 140 fish species and 199 birds, many of which are migratory, endemic and residents.

Mangrove forests, tropical dry forests and riparian forest cover most of the area. The mangroves cover a third of the area (12,000 hectares) and the three predominant species are: red mangrove, black mangrove, white mangrove and buttonwood.

In 2000 the park was designated a Biosphere reserve by UNESCO. 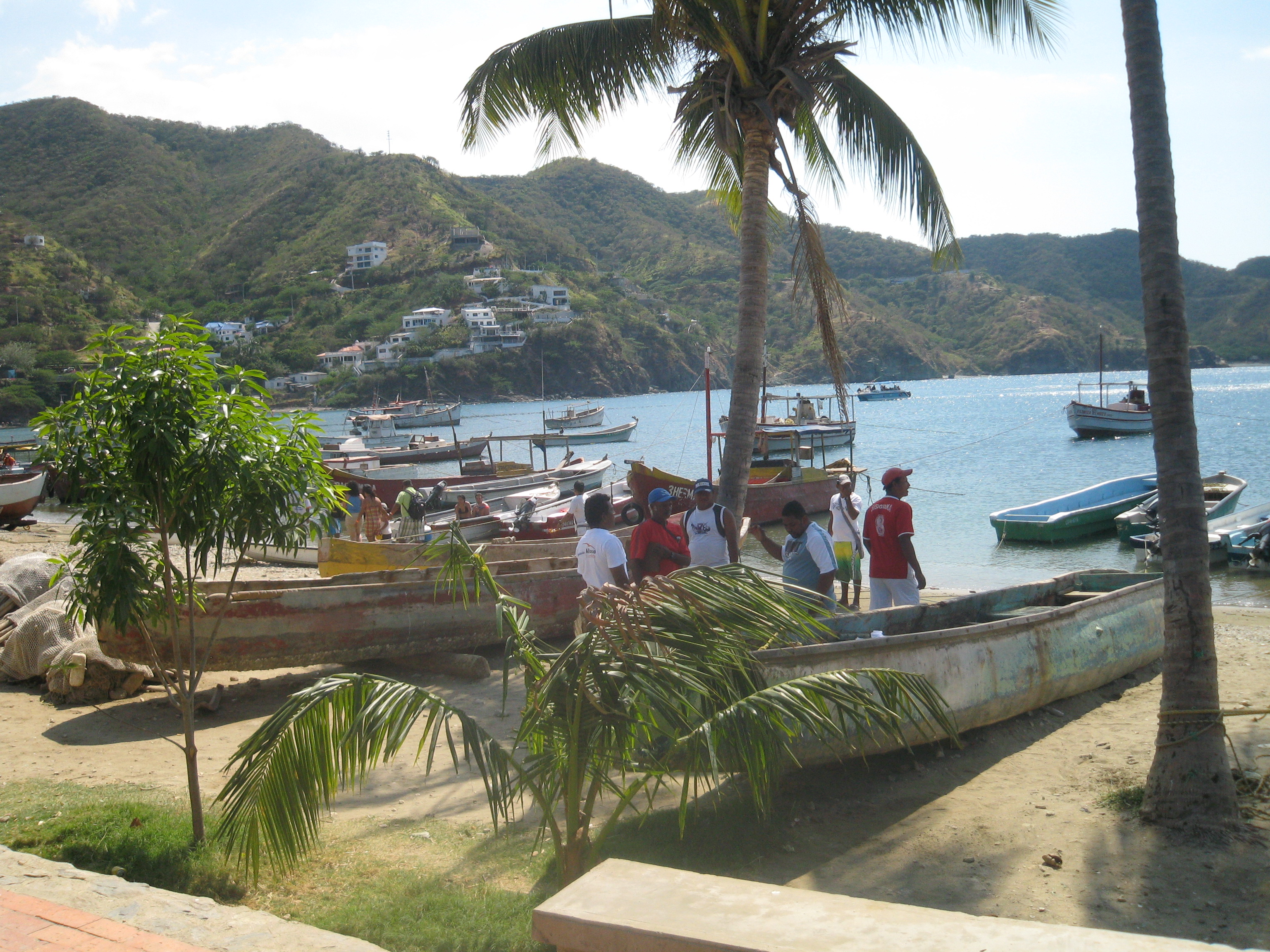 La Casa de Felipe is a beautiful hostel located in Taganga – a typical small fisherman’s village only 15 minutes from Santa-Marta (Colombia), and an easy 10 minutes walk from the beach.www.lacasadefelipe.com

Taganga turned in to a popular scuba diving center with one of the lowest prices in the world. Diving spots are usually near the small island “Aguja”, a part of Tayrona National Park. The underwater of Taganga has a big diversity of marine life.

Frequent minibuses(collectivos) go from Carrera 5 in Santa Marta to Carrera 2 o 3 Taganga for $1,200 per person (April 2009). It’s about 15 minutes. Beautiful ride. You can get off at the Mirador and walk down to town.

Ciudad Perdida was discovered in 1972, when a group of local treasure looters found a series of stone steps rising up the mountainside and followed them to an abandoned city which they named “Green Hell” or “Wide Set”. When gold figurines and ceramic urns from this city began to appear in the local black market, authorities revealed the site in 1975. Members of local tribes—the Arhuaco, the Koguis and the Arsario—have stated that they visited the site regularly before it was widely discovered, but had kept quiet about it. They call the city Teyuna and believe it was the heart of a network of villages inhabited by their forebears, the Tairona. Ciudad Perdida was probably the region’s political and manufacturing center on the Buritaca River and may have housed 2,000 to 8,000 people. It was apparently abandoned during the Spanish conquest. Ciudad Perdida consists of a series of 169 terraces carved into the mountainside, a net of tiled roads and several small circular plazas. The entrance can only be accessed by a climb up some 1,200 stone steps through dense jungle.

The Kogi claim to be descendants of the Tairona culture, which flourished at the time of the Spanish conquest, after the destruction of the Tairona cities they escaped into the higlands, where they have been living in relative isolation for generations. Their mythology teaches that they are “Elder Brothers” of humanity, living in the “Heart of the World” (the Sierra Nevada of Santa Marta). Those not living in the Heart of the World (generally people from the west) are called “Younger Brothers.” Their mythology suggests that these Younger Brothers were sent away from the heart of the world long ago. In response to infringements on their homeland by westerners, a legend arose claiming the Younger Brothers had now found their way back, and were reaping their destruction on the land.

The Kogi base their lifestyles on their belief in “The Great Mother,” their creator figure, whom they believe is the force behind nature, providing guidance. The Kogi’s understand the Earth to be a living being, and see the colonizers’ mining, building, pollution and other activities damaging the Great Mother. From birth the Kogi’s attune their priests, called Mamas, to the mystic world called Aluna. It is in this “spirit-realm” that the Mamas operate to help the Great Mother sustain the Earth. Through deep meditation and symbolic offerings, the Mamas believe they support the balance of harmony and creativity in the world. It is also in this realm that the essence of agriculture is nurtured: seeds are blessed in Aluna before being planted, to ensure they grow successfully.

The Kogui people live largely in peace amongst themselves and their environment. They use slash-and-burn farming methods; each family tends farms at varying altitudes of the Sierra, producing different crops to satisfy the range of their needs, they also raise cattle on the highlands. Their community is closely knit around the Mamos, while the rest of the community works under direction of the Mamos. In 1990, having seen evidence on their mountain to suggest extensive worldwide ecological damage, the Kogi’s sent a message to the world via a Lampeter University archaeologist, filmed in partnership with the BBC. The Kogis gave a warning to the “Younger Brothers”: “ …the world doesn’t have to end; it could go on, but unless we stop violating the earth and nature, depleting The Great Mother of her material energy, her organs, her vitality; unless people stop working against the Great Mother, the world will not last.

By admin | Beyond Santa Marta
NextPrevious »